Get Fuzzy wiki
Register
Don't have an account?
Sign In
Advertisement
in: Bucky's "Gang", Main Characters, Cats,
and 4 more

Bucky Katt is a selfish, cynical, and lazy Siamese cat. His ears are nearly always drawn laid back flat on his head in a defiant, aggressive and unfriendly manner, unless he is forced to have them up, gets surprised, or has a bedhead. In certain color pictures of Bucky, his eyes seem to be a mix of sky blue and wisteria purple, rather than a plain sky blue.

Rob Wilco found Bucky huddled on a trash can, while the cat was only five ounces and a few weeks old, in Hackensack, New Jersey. While Bucky's father has never been mentioned, Bucky gave his mother's maiden name on a credit card application as "Tricky Woo," a reference to the ludicrously pampered (but in fact good-natured) pet dog of that name in James Herriot's stories of his experiences as a vet. His cousin is Mac Manc McManx. Bucky was given his name in reference to his fang, which protrudes from his mouth much like a buck tooth.

Bucky lives in a dresser located in the hall closet of the Wilco Apartment because he refuses to share a room with Satchel. It has also been mentioned that when they moved to that apartment, Bucky chose the closet because "it was the safest place in case of assault."

Bucky spends much of his time watching television, especially early in the comic strip. Early on, it was said that Bucky spent at least half of his day watching television, though this was phased out as the author decided to make Bucky's schedule more nap-oriented. Many storylines have Bucky continually finding ways to antagonize and annoy Rob and Satchel, which he once called a hobby.

On most outdoor excursions, when Rob is present, Bucky is carried in a strap-on "Bundle-O-Joy" baby carrier, referenced as a way of keeping the cat out of trouble. Rob has also been known to use a harness leash on him for the same purpose. Bucky also has an inexplicable fear of mice as shown when he was literally scared stiff seeing one.

Bucky is frequently depicted as possessing an abundance of rather disagreeable feline traits, such as anti-social tendencies, delight in random destruction (at times bordering on vandalism) and violent behavior, hostility, and personal selfishness at a much higher level.

Most of this is directed at Satchel, as he endeavors to wreck Satchel's optimistic outlook on life, but usually fails, as Satchel does not have enough intelligence for his rude sarcasm and is often unaware that he is even being insulted. Other foibles are that he is "ignorant, arrogant, selfish, hostile, and has many hygiene issues".

Rob, who is more cynical and worldly-wise than Satchel, frequently jabs at him in ways calling him out on his behavior, once remarking that his cat's intelligence quotient was 1.

Bucky is often shown to be a very poor fighter physically, often getting hurt or humiliated (or both) when he pick a fight. Oddly enough, when Bucky does fight, his weapon of choice is a spork. He also claims to "swing a mean sock of legos".

Although he feels the need to maintain an "alley cat" image, Bucky occasionally reveals a kinder, kitten-like nature. He has also once voluntarily fixed Satchel's watch, and after the September 11, 2001 attacks, while Rob and Satchel left to donate blood, he decorated the apartment with thankful balloons and signs, and baked some cookies for them to show his appreciation.

Three obsessions dominate Bucky's life: The Death of Fungo Squiggly, the ferret who lives next door, his desire to eat a monkey, and wanting a movie made either about him or in some way by him. None of these goals has any reasonable rationale behind it, and he fails brilliantly in his repeated attempts to fulfill these obsessions. Fungo routinely disrupts Bucky's schemes, the single encounter he had with a monkey in the zoo resulted in the chimp trying to peel Bucky (thinking he was a banana), and his movie schemes always end with a lack of funding after initial rejection by Rob to "invest" into the movie project.

His attempts at intellectual superiority are undermined by his constant malapropisms and his habit of making ridiculous claims, which he never admits as being factually incorrect, such as saying that owls, locomotives, England and Canada do not exist, even though Bucky has visited the latter. Bucky is furthermore frequently depicted as believing in absurd conspiracy theories, or absurd theories in general.

Bucky claims to be a fan of the "Yankers," even wearing a Yankees cap throughout the series, only because Rob wouldn't let him wear the "'B' is for 'Bucky'" hat (which the "B" really stands for "Boston"). He taunts Rob when the Red Sox play poorly, but knows little about baseball. Bucky's one acknowledgment to Rob's obsession with Rugby Union football came when he inexplicably performed the Ka Mate Haka made famous by Rob's favorite national team, the All Blacks of New Zealand.

Although he professes a lack of interest in the Harry Potter series unlike Rob, Bucky took part in a spoiler-filled discussion of Harry Potter and the Half-Blood Prince with Rob regarding the allegiance of potions master Severus Snape, and also uses the series' fictionality as the basis for his aforementioned claims about trains, owls, England and Canada. Bucky seems to like Slytherin House because Satchel is a fan of Hufflepuff House.

Bucky has been shown to hold extremely conservative political viewpoints throughout the strip (he is a Republican), but these may not stem from actual convictions as much as a desire to antagonize Rob and Satchel, both apparent liberals. Bucky is also frequently shown to have francophobic and anti-Quebec sentiments (he regularly says words like frog and canuck, although these, like his politics, appear not to stem from racism or nativism but from the desire to antagonize Satchel for his background).

Bucky also has the desire to kill and/or eat other animals. He has tried to trap birds, and asked Rob if he could eat all kinds of animals. He has been shown eating roadkill and an ant. He once referenced eating endangered animals because they were wimps that could not stand up for themselves. 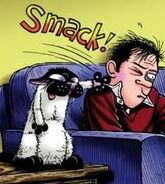 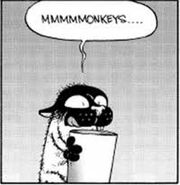 Memo to Self: Destroy Rob Wilco...

Community content is available under CC-BY-SA unless otherwise noted.
Advertisement