Robert "Rob" Wilco is the "owner" of Satchel Pooch and Bucky B. Katt. He serves as the straight man between Satchel's goofy naïveté and Bucky's cynical hostility, observing their antics and those of their various animal friends with bemusement, amusement, or both. In the Get Fuzzy universe, virtually all animals talk, a situation that no one seems to find odd for some reason.

Rob is portrayed as a bit of an everyman: a mediocre performer in a job he dislikes, not successful romantically, and an all-around relatively quiet guy with a poor haircut and chronic lower back pain. His passions, which often border on obsessions, include sports (particularly the Boston Red Sox and the New Zealand All Blacks), video games and books. Rob is often shown reading, usually while in bed. He seems to particularly like the Harry Potter series, as does Satchel. He is also a vegetarian (vegan in some comics) due to what he feels are too cruel methods of killing the animals and either politically liberal or at least a Third Party member.

At one time, Bucky, obsessed with a Persian who was living in the building, attempted to grow his hair out with a bottle of Rogaine. After two bottles were used and Rob flipped at the long tufts of hair that sprouted from the cat's head and chest, Bucky mixed some "no hair cream" with Rob's shampoo that he intended to use later. However, Rob got to the shampoo first, and as a result was bald and annoyed for several weeks.

Rob is a sports fan (he likes Baseball, Hockey, Soccer, and Rugby), and it is alleged by his friend Joe Doman that he named both pets after stars of baseball: Buck O'Neil and Satchel Paige (despite, as noted above, Rob says he named Bucky because of his one fang). An alternate theory (probably untrue) is that Bucky is named after late-1970s outfielder who hit a game-winning run against them in a tie-breaking playoff game to determine the Eastern Division champion in 1978. However, this has not been explored in the strip, though a joke about the words "Bucky Dent" was used in 2001. Rob is named after two friends of Conley's graduating class at Doyle High School. 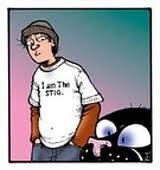 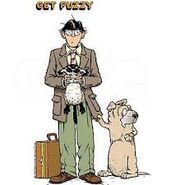 Rob Wilco, earlier on in the strip.

Another image of early Rob Wilco

Rob Wilco later in the strip.
Add a photo to this gallery

Retrieved from "https://getfuzzy.fandom.com/wiki/Robert_Wilco?oldid=8447"
Community content is available under CC-BY-SA unless otherwise noted.